… And so I pondered in June 1996 at a basic-course in Autogenic Training. I had signed up for this course because of my good experiences with the relaxation warmth; I had had after my pictorial image of the soft, light, enveloping blanket. In the course, I hoped to find more inspiration for relaxing and warming exercises. Before the class began, the instructor told me: “This doesn‘t help with autoimmune diseases.” However, I didn‘t let that discourage me and sat in my seat on time.

As we introduced ourselves, the instructor’s first note on my introduction was: “An autoimmune disease arises when the body is attacking itself.” While the other participants gave me compassionate looks, I figured:

So if „I“ am capable of attacking myself, then I can as well stop it and get well!

What power I must possess over myself so that I can cause rheumatoid arthritis – and that without knowing anything about it for all the passed time!

I can help myself!

and I pondered on: “How does RA feel? Like a searing knife – like an ongoing, raising cramp in the calf or the foot!

And what eliminates a cramp?

This fantastic finding stayed with me, made me marvel and happy for it opened a new perspective that led to new possibilities and gave me hope.

In the beginning, we participants should enter into the conscious relaxation with the phrase “everything is heavy and warm”*.

Not only could I sense and relax larger body regions (like my hands, feet, arms, legs, etc.) as directed, but due to the awful pain that raged in my body, opposed to the other participants I was involuntarily practised to even sense much smaller areas, for example, my finger and toe joints.

Since then, I trained silently all by myself. And as I trained and relieved my pain, my desire to end RA once and for all grew. I had suffered for so long that I wanted my whole body to be pain-free at once – and I wanted it now. But in my attempts to direct my deliberate concentration on the relaxation of all regions, I felt pain in at the same time, I failed. The relaxation I used was activating my senses, and so when I used it against the pain in the first place, it enrolled and became worse before I could end it. So it went as I tried to relax my whole body at once: the pain I experienced with my activated senses was too severe to handle. I felt like the pain was floating me away, and my experiments stopped first. And back home waited enough piled-up work for me to do.

The class became my haven where neither household nor work mattered. It was a free zone where I only needed to sit in my chair and care about myself. I no longer dared to make my all-encompassing physical training attempt. So I was in a big circle, all other participants were busy, and I sat around. No stress, no racing.

My right thumb reported pain. My hand laid calm and open on my upper leg. I looked down on it and tried my first, own exercise on my thumb and my heel of the thumb.

And it worked as soon as I combined conscious relaxation with mental images and followed my pain perception!

This way, I overcame the pain and the inflammation!

I then repeated this exercise with every pain attack and expanded it from my thumb with increasing success. I had begun with a simple mental image that was associated with comfort and triggered relaxation and from now went on with consciously combining my relaxation exercises with my mental images.

Doing so, I could master more intense pain which led to the complete decay of the respective inflammation and later the entire chronic reaction chain.

I watched how my body would act after my relaxing images and realized: it didn’t hate and therefore endlessly attacked itself but reacted to being mistreated through harmful posture and movement. Constructed and connected in the right way they would only work if they were imagined and repeated, clear and distinct. And while they unfolded their efficiency I developed a feeling of myself as a whole as an organism with a soul in which everything affects everything.

With success, my conviction changed from: “I will (someday, somehow) heal RA” into: “I am healing my RA (right now)”.

From this point in my HeilÜben-exercises on, I directly put my skills to use against pain, inflammation, and chronic course. My pain and my new knowledge about where it came from allowed me to detect previously unnoticed tension.

So over time, I started to know better by my own experience, how and why my body felt how it felt:

I identified my tension as the cause of the inflammatory and painful process in my joints in everyday situations and relaxed explicitly to address this tension. I learned how my RA as a result of mechanical joint overload emerged and was maintained in poor posture and movement due to excessive tension smaller-scale and/or poor posture.

The HeilÜben-exercises in Level 2 start with the hands. In my case, they were the starting point from where the inflammation of fingers, hands and arms spread over other parts of the body, and I could restrain it from there as well.

Within a few weeks, I managed to respond to the pain signals in my hands, arms and feet immediately after their commencement.

So I tried in a variety of situations, whether and how I relaxation, which I deliberately used, helped against inflammatory pain. It was not about getting into undiscovered depths of relaxation and doing something particularly difficult. It was about actually using my skills. Just by trying, giving myself the necessary opportunities and time and peace, I trained and was able to relax more intensively than before.

I experienced that pain and inflammation in the area with which I practised subsided and eventually disappeared.

The individual exercises lasted only a few minutes in the subsequent period and went more and more into the habit. The distances between the sudden at some point, my body appearing pain attacks widened.

But still, it wasn‘t all rosy all of a sudden. The following difficulties still were an exception to my rebuild pain-control:

While I was thinking and trying, my back, shoulders and knees benefited from the sharp decline in inflammatory tendencies in general. Different inflammatory sites didn’t occur anymore at the same time, and I trained my elbows with my forearm/upper arm exercise.

I found excessive tension in more and more everyday situations as I continue to relate my thoughts and emotions to my posture and movement. With my considerations, I started with my hands because they were where my RA had started:

Our hands are essential companions. They can help us coordinate and control, to express us through body language, our expression of feelings and needs. We are taking matters into our own hands. This is evidenced by our need to reach and shape the things around us, to give them meaning; the need to prevail, to communicate. And this influences the position of our arms and legs, our hands and feet to each other.

In the case of misperceptions, I still sometimes spontaneously tried to achieve expression by tensing my body. With what’s today’s Level 3, I consciously and deliberately reduced this habit by using relaxation instead of tension.

This way, I could reduce this tension permanently below my upper limit.

The HeilÜben-exercises are a severe business like any other. The less one knows, the less it’ll bring. And in spite of every amount of suffering nobody wanted and deserved. So I rolled up my sleeves and learned to deal with the stress-related rheumatoid arthritis more skillfully than before.

To heal and to lead a healthier life, I needed my rational mind, my body-consciousness and my psyche alike. Only the use of all three made it possible to grasp my challenges as best as possible. My body „told“ me when I felt pain, my psyche whenever I was sad, angry or anxious, and my rational mind helped me to put all the experiences together. I could then try what would help best against pain and inflammation. Sometimes I learned faster sometimes slower. I corrected myself whenever I found a logic mistake and added my insight into my experiences of what I found to be helpful to use against RA.

With the HeilÜben, I brought my RA back into a rational area where I could apply logic and work out what I was dealing with. I noticed that I could comprehend the overload that tormented my body. This relieved me from a significant stressor that followed my condition: The fear of the unexplainable of the uncontrollable.

Besides, during the HeilÜben, my disease-sustaining tension habit, the chronic course, was reduced.

And from there I went on until I healed: I felt arthritic pain and used my exercises, adjusting them to my current needs.

I gained experiences and got more confident as I became convinced that I did something right and effective. So I was able to react sooner, quicker and purposefully. And this after a while of exercise even if, for example, I was distracted or still half asleep.

My body would tell me:

pain – there is still a problem there

In this manner, I was able to detect overload, tension and stress factors and to relieve them gradually.

With my approach, I simultaneously relieved musculature and connective tissues and consequently, my joints. According to the release, the inflammatory and destructive operations declined.

With the now expanded exercises, I learned how to divide my attention so that, for example, I could imperceptibly practice amid a lively conversation, without interrupting it.

I had learned that I reacted to unpleasant sensations with tension. I continued practising to prevent, end or handle unfavourable circumstances to regularise my emotional response so I would be less strained. I could find my inner peace when the stressing situation was over. Even if a specific circumstance, which I found unpleasant, stressful, annoying or scary, did not change at all. When I relieve my tensions, I relieve myself as a whole. My sensations become less uncomfortable; I lose less energy and stay healthier.

I got to know the effect of tension, which either influenced me for a long time or fast and excessive, as a trigger and maintainer of my RA.

The constant practice now fulfilled the purpose of detraining the ill habit of responding to stimuli and overloads with unresolved tension and confirmed: With attention and conscious movement, I was able to change my physical and mental condition to the turning point! Within the following months, my HeilÜben exercises grew with my findings and became more and more a strong, healthy habit, that eventually would let me sleep without inflammation.

Next post: A strong emotion found physical expression faster than a conscious thought had the chance to intervene 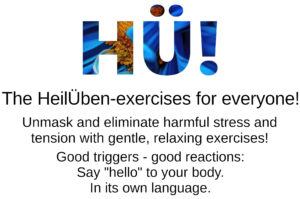 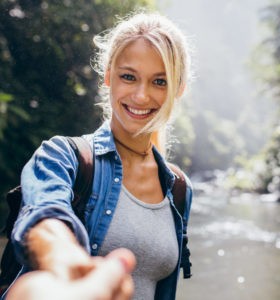 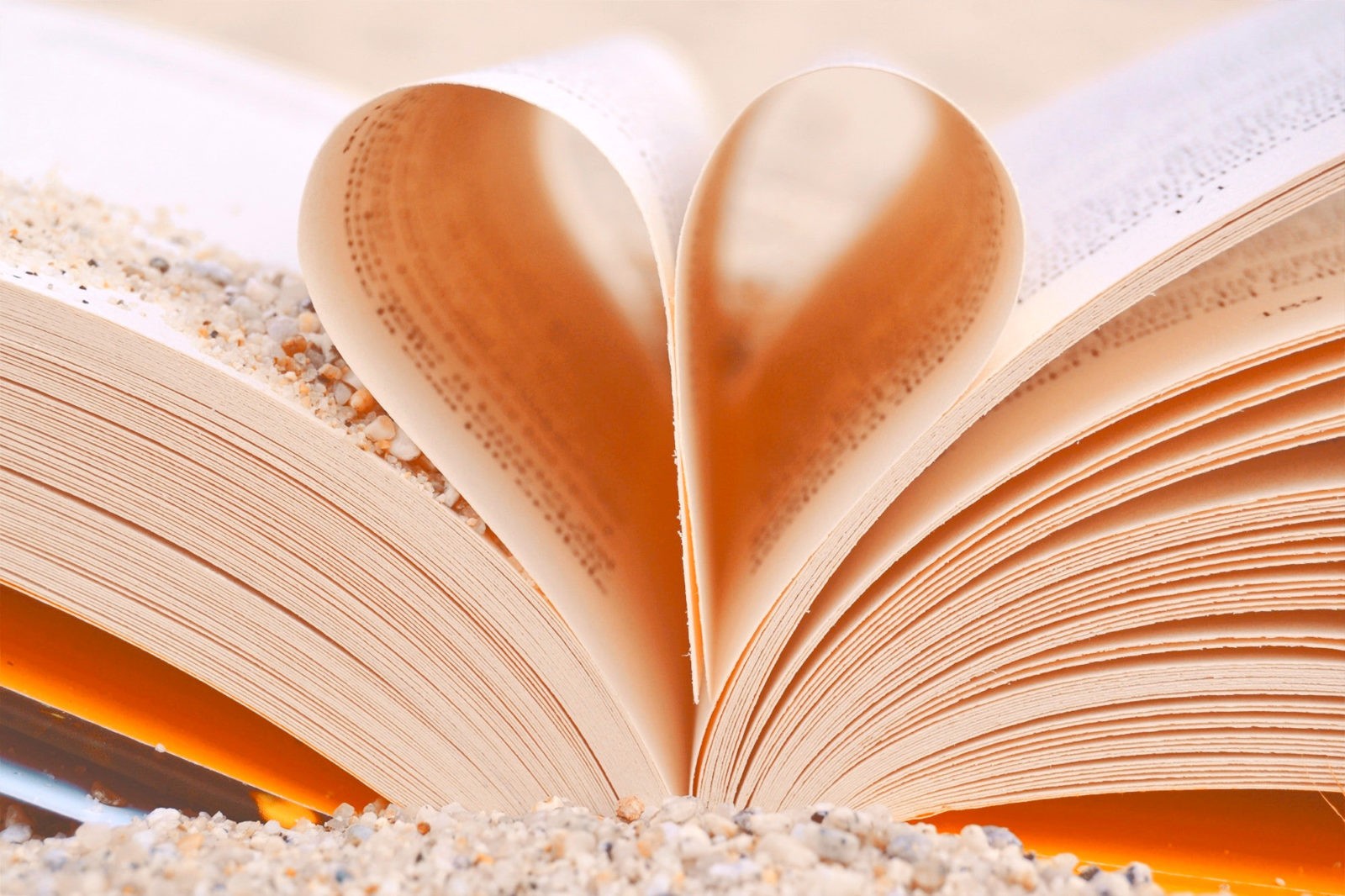 HÜ-exercises. A programme for everyone! 24/7 hotline, classes, talks, and readings